skip to main | skip to sidebar

OK, so I am now in Essex. But it is not all bad as I am in Colchester, which has a University, lots of Roman wall and the Parachute Regiment. Two out of three is not bad.

It also has a small wargames club, and I have already pottered over to see what is going on. It is a bit of a mixed bag, from what I could work out, with some periods and styles I do like the look of and some that seem to me screaming heresy. Of the former there looks to be an interesting Crossfire stream with several club members having WW2 forces. I am left wondering whether this would work for WW1 Eastern Front as someone has started bringing out some interesting-looking Austro-Hungarians and Russians are available too. Of the latter, units that are made up of eight 15mm figures on two 1-inch by 1-inch bases might as well be just counters. I do like units to look like units.

The club meets once a week with a larger game once a month. This seems ok and I am already thinking about what I may want to do. There are several projects and ideas that I could either run again or try to get finished for the club entire... 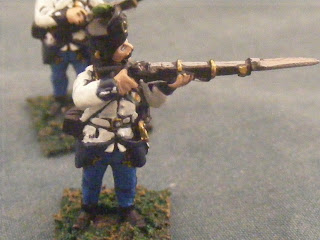 The most obvious is the 1792 figures I have. At my old club of Guildford I ran a series of computer-moderated battles from the French offensive into Belgium: Quaregnon and Marquain and a couple of others. This led to a fully fledged 1792 campaign. I have the figures and have all the research. In fact I have run this campaign twice. In both cases the Austrians had fairly low expectations of their army and were pleasantly surprised that it actually managed to perform adequately. The real laugh were the French players who were all to a man locked in a Napoleonic mindset and assumed their army was the Grande Armee from around 1806. In fact it was the Armee du Nord from 1792. So the complex operational plans soon fell apart whilst on the field the brittle Garde Nationale soon proved to be of questionable value. The key French strategy in 1792 is numbers and attrition, to force the Austrians to 'win themselves to death'. 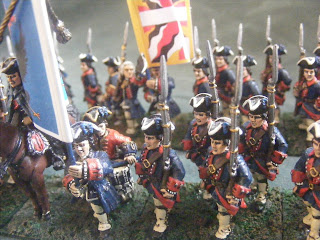 I can also plan to run Camposanto. This project has been underway for some time but has been moving forward slowly as I have been focussed on troops for bigger games at Liphook. But it would make a good Sunday game for the club, whilst in the interim the units will gradually get to a level when evening games are feasible. What I really need to start thinking about is rules. I have toyed with using Computer Moderated rules, but these may not be granular enough for Camposanto and are not good for large multi-player games. I have bought 'Maurice' and could use that, with some modification for the game itself. The third is to write some rules myself specifically for Camposanto. So far I do not have enough units for a realistic game of any size, only half a dozen battalions per side. But I have the figures to improve that and get to the stage where smaller games are possible. Certainly the units are very pretty, both are very colourful armies and the battle itself is evenly matched so it would make a really good club Sunday game. 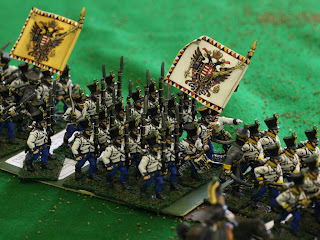 OK, so I am now developing serious numbers of these. The main focus at the moment is finishing my French Division, and I am only 3 battalions, a cavalry regiment and a battery away from that. This would give me 15 infantry battalions, three cavalry regiments and three batteries, basically a useable single-player force to which could be tacked on fourth battalions or whatever. After that I can carry on with the Wurttembergers, of which two regiments are now painted but more to do. Also, Front Rank now produce cavalry, light troops and so on which would complete the project nicely. Ultimately this should give a fairly sizeable Franco-Wurttemberg force. The thing is I will need to expand my French, although the more greatcoats the better as all that bloody piping is driving me up the wall...

The Austrians still potter on. They are my passion and I think I will always have some whitecoats on the go. Currently I need to rebalance my force with a lot more German infantry, but my aim at the moment is to complete Hessen-Homburg's Reserve-Abteilung from Leipzig. Yes, I know, it is the one with all the Grenadiere and Kurassiere and 12 battalions of Hungarians, but looking at the battle itself only it and IV Abteilung really did anything of note on day one. II Abteilung was given an impossible task whilst III Abteilung, 1st Light Division and Streifkorps von Thielmann were opposite Lindenau.

Most of IV Abteilung I can field already, ok much of it in raupenhelm but I am not that much of a purist. If Liphook ask I will be able to field IV and Reserve Abteilung by October with a bit of luck. I am not sure the same will be true of my other allied project, Kleist's II Prussian Korps. True I have a large slice of this, but I cannot see me getting it all completed as well as the Reserve Abteilung. One possible club game for a Saturday would be Teugn-Hausen in 1809.

This is not to forget my 1806 Prussians who are now pretty much completed, with 13 battalions and an awful lot of cavalry. 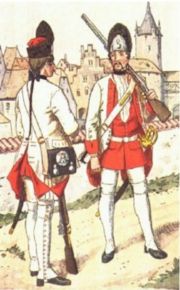 Yes, there are other things: 20mm Winter War Finns, unpainted 15mm SYW, 15mm Marlburians, 20mm Fictitious wars, 1/6000 WWI Naval, and a lot of 15mm Napoleonics that have not seen the light of day for over a decade. You lose track...On top of this are things that I would like to do: 10mm 1848/9 in Italy (there is a nice Italian manufacturer) is one that I have always wanted to try out. The Western Desert 1941: a refight of Beda Fomm for example.

Anyhow, lets just say that I have more than enough unpainted metal to last me for a while yet. I will keep you all nicely fed with eye candy until the next large Saturday game with the Colchester club: the last one was Austerlitz. I do not know about the next.

Posted by John Chisholm at 2:37 PM

Hi John,
You have a cracking blog and I would like to follow it however I cannot for the life of me see where to do it?

I'll put you in my own list so I don't miss your updates!

John Chisholm
Colchester, Essex, United Kingdom
Ok, a bit of info about me. I started wargaming when I was 13. I began with two ready-made Minifig armies, one Russian and one French, badly painted, but inspired by an Alan Humble book, the chapter on Austerlitz just caught my imagination. Who were these Russians? Was Austria really a big country? Did they wear white so they could hide better in the Alps? As time wore on I learned more and my interests gravitated towards the Austrians. After playing with 15mm stuff for the first 20 years of my wargaming ‘career’, I had a mild stroke in 2003. The effect was that I really could no longer paint 15mm, so I have shifted to 25mm, and that has been bolstered by the big games that I have been in volved in. The target now is to get together a division for each major battle in the future or from each major player: so the Prussians for Jena were first, and I am currently embarked on Austrians for 2009 (all of IV and V Kolonne from Aspern-Essling) and a French division plus a Spanish division for the Peninsular. As if this was not enough my own personal project, the Italian Campaign in the War of the Austrian Succession, is slowly taking shape.